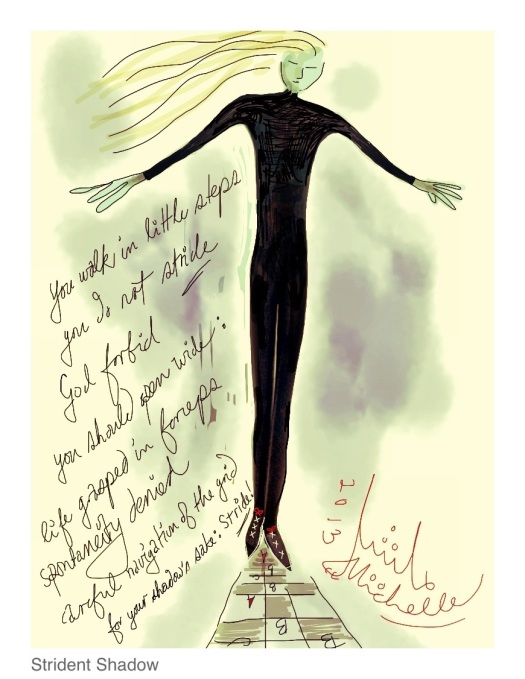 No woman deserves a wimpy shadow.

Hat Tip to Alberto Giacometti Walking Woman, on show at The Tate Modern.

An interesting discussion: The Human Race, handled with care, by Laura Cummings in the Guardian.

Apparently, today is Take-your-poet-to-work Day…Well, it would be pretty crowded in the studio then. I have been meaning to read some more Pushkin. I have unfortunately not seen the Eugene Onegin opera, but you can listen to it here! Just as delicious, you can listen to the translated poem here, read by the inimitable Stephen Fry. The poem has been translated by various people, including Vladimir Nabokov and Douglas R. Hofstadter (of Gödel, Escher,Bach).

There is a beautiful ink self-portrait of Pushkin on the Wikipedia site:

Plus ennuyeux et plus braillard

(Another interesting resource I found, as translated by G.R Ledger: Pushkin’s Poems…)

(h/t to Kafka and Cockroaches)

Since changing into a cat

The world has cats

Cats that vomit up hairballs

Dogs that gobble it up

I wish there were more whales

(green prom dress made with love

to match my eyes

the colour of seared leprechaun green)

a mix of fine ash and bees wax

with kernels of golden squid beaks

Those whales, how they

I am hungry for

I was reminded of a sketch I did many years ago when I read this interesting blog post on the Interesting Literature site. I always liked the name Imogen.

“3. Cymbeline. This is unusual among Shakespeare’s plays, being one of the ‘problem plays’ – named partly because the central character must face some sort of social problem (in this case, Cunobelinus, the British king – or ‘Cymbeline’ – has to deal with the Romans who have occupied Britain) and partly because the play doesn’t fit comfortably into either genre, comedy or tragedy. This play, written late in Shakespeare’s career, features the famous song ‘Fear no more the heat o’ th’ sun’ (which, despite its status as a great tragic lament, is actually sung to an empty tomb, since the character in whose honour it is performed is not actually dead).

Interesting Fact: The girls’ name Imogen derives from this play – probably from a misprint. Somewhere along the line, the pre-existing name ‘Innogen’ (meaning ‘girl, maiden’) was misread as ‘Imogen’, with the ‘nn’ being confused for a letter ‘m’. Girls named Imogen have been thankful ever since (or should be!).”

(Note that the original piece does not contain the embedded links to Wikipedia. I put them in for further context, and because I find them interesting.)

I love this tidbit From Wikipedia’s entry on Cymbeline:

“Probably the most famous verses in the play come from the funeral song of Act IV, Scene 2, which begins:

Fear no more the heat o’ the sun,
Nor the furious winter’s rages;
Thou thy worldly task hast done,
Home art gone, and ta’en thy wages:
Golden lads and girls all must,
As chimney-sweepers, come to dust.

These last two lines appear to have inspired T. S. Eliot; in “Lines to a Yorkshire Terrier” (in Five-Finger Exercises), he writes:

Pollicle dogs and cats all must
Jellicle cats and dogs all must
Like undertakers, come to dust.”